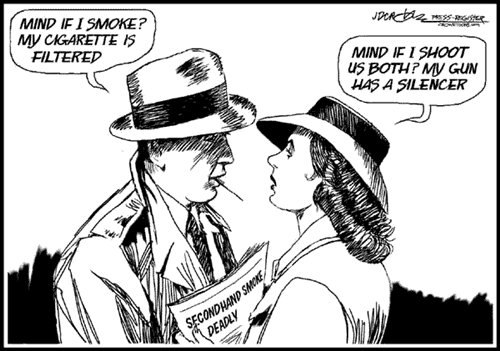 Breathing any amount of someone else's tobacco smoke harms nonsmokers, the surgeon general declared Tuesday — a strong condemnation of secondhand smoke that is sure to fuel nationwide efforts to ban smoking in public.

"The debate is over. The science is clear: Secondhand smoke is not a mere annoyance, but a serious health hazard," said U.S. Surgeon General Richard Carmona.

Carmona implored parents who can't kick the habit to smoke outdoors, never in a house or car with a child. Opening a window to let the smoke out won't protect them.

"Stay away from smokers," he urged everyone else.

Even a few minutes around drifting smoke is enough to spark an asthma attack, make blood more prone to clot, damage heart arteries and begin the kind of cell damage that over time can lead to cancer, he said.

Regular exposure to someone else's smoke increases the risk of a nonsmoker getting heart disease or lung cancer by up to 30 percent, Carmona found.